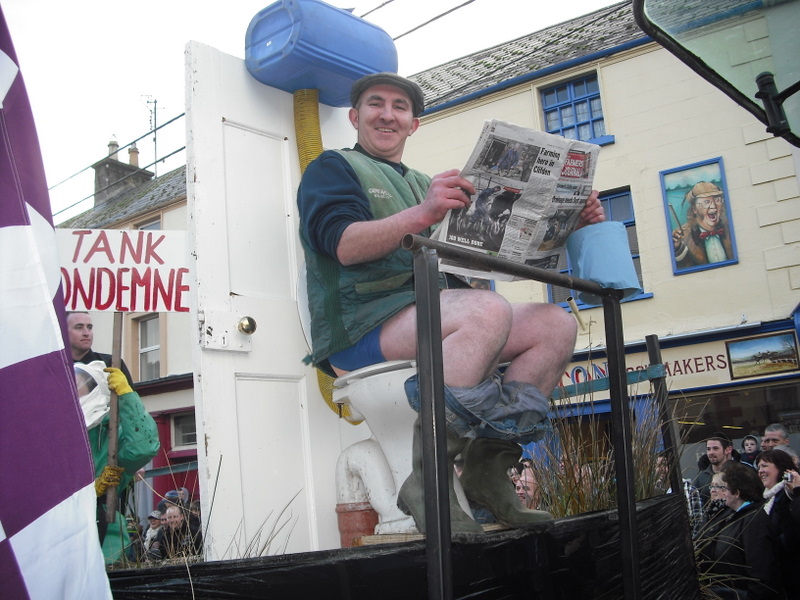 A big Castlecomer thank you to all who contributed to making Wellie Race 2011 the major success it was. We hope all had a fantastic day and that you all had a ball. Below are some of the images of the day and links to further photographs. The Race and Float results are also below, congratulations to all who participated, you are all winners.

The presentation of funds and merit awards will take place in Shortall's Lounge The Square Castlecomer on Friday March 5th. All merit award winners, people who assisted on the day and sponsors are invited to attend. Many thanks to all who helped make the day the success it was and continues to be. Beneficiaries please contact us with the name of your representative who will be attending. The Children's Merit Award night will be in the Library on the previous night Thursday March 4th.

Thanks to all who contributed into making Wellie Race 2009 yet another fantastic success. The crowds on the streets were fantastic with people travelling far and wide to join in on the fun of the day. A special thanks to race Personality Pascal Scott who really entered into the spirit of the event in a way like no other previous Personality.

Wellie Race 2008 the most successful ever?

(for 2005 photos, please click here....) - Jan 1st 2005 was far from the warmest New Year’s Day Castlecomer had ever experienced but with festive mood still in ample supply after Castlecomer’s first white Christmas in decades thousands still took to the streets to celebrate the Twenty fifth Castlecomer Wellington Race.

Yet another New Year and yet another successful Castlecomer Wellington Race. The Gods were surely looking down on us this year. Following torrential rain on New Year’s Eve, 2004 started with clear skies and sunshine.

As we have come to expect the day was full to the brim with fun craic and no small amount of competitive edge. The real winners will however be the beneficiaries when the monies will be distributed in March.

The float parade was as usual colourful and proved to be a difficult task for the judges to decide upon. Eamon Brennan chairman of the judging panel summed it up when he declared all participants to be winners. What with rapping Egyptians, Dublin Vikings, The new Firoda Equestrian centre and its first race meeting, Celebrity Farm the rerun, the real story of Saddam Hussain’s capture, Culchies running amok, The new Radio na Powley (culchie language station), a real Majorette group instead of our own major regrets group, a shock appearance of the invisible man, Disney characters spraying the crowd with glitter and bubbles, Erin’s Own Hurling Club displaying their trophy haul from the past season, a re enactment of the cannonball run movie, The Red and Yellow M&M’s, a Mars Lunar Buggy and much much more it certainly was not a parade to be missed. We have uploaded a small example of the colour and wit of the day in our photo section, please peruse at your leisure.

Just when you think its safe to assume that nothing new could be thought of for a float parade its New Years Day again and the Wellie Race is upon us.

The 2003 parade will long live in the memory of those who witnessed it. The range, imagination and pure genius that went into the parade were unbelievable.

January 1st 2002 will be remembered far and wide as the day the Euro entered our pocket but here in Castlecomer the Euro had to wait for one more day.

While all of Europe was adjusting to euro and cent Castlecomer said "No, not until tomorrow." The Wellie Race was in town and we were having no funny money at that. Most shops and pubs were ignoring the official line and giving change in pounds and pence. The absence of the new currency however did not dampen the craic or the enthusiasm of the float participants or runners alike.

You can have all your millennium madness but there is no mayhem to match the Castlecomer Wellington Race.