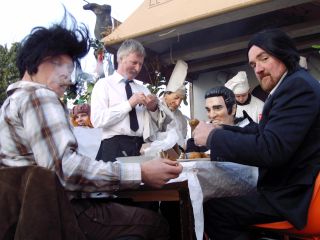 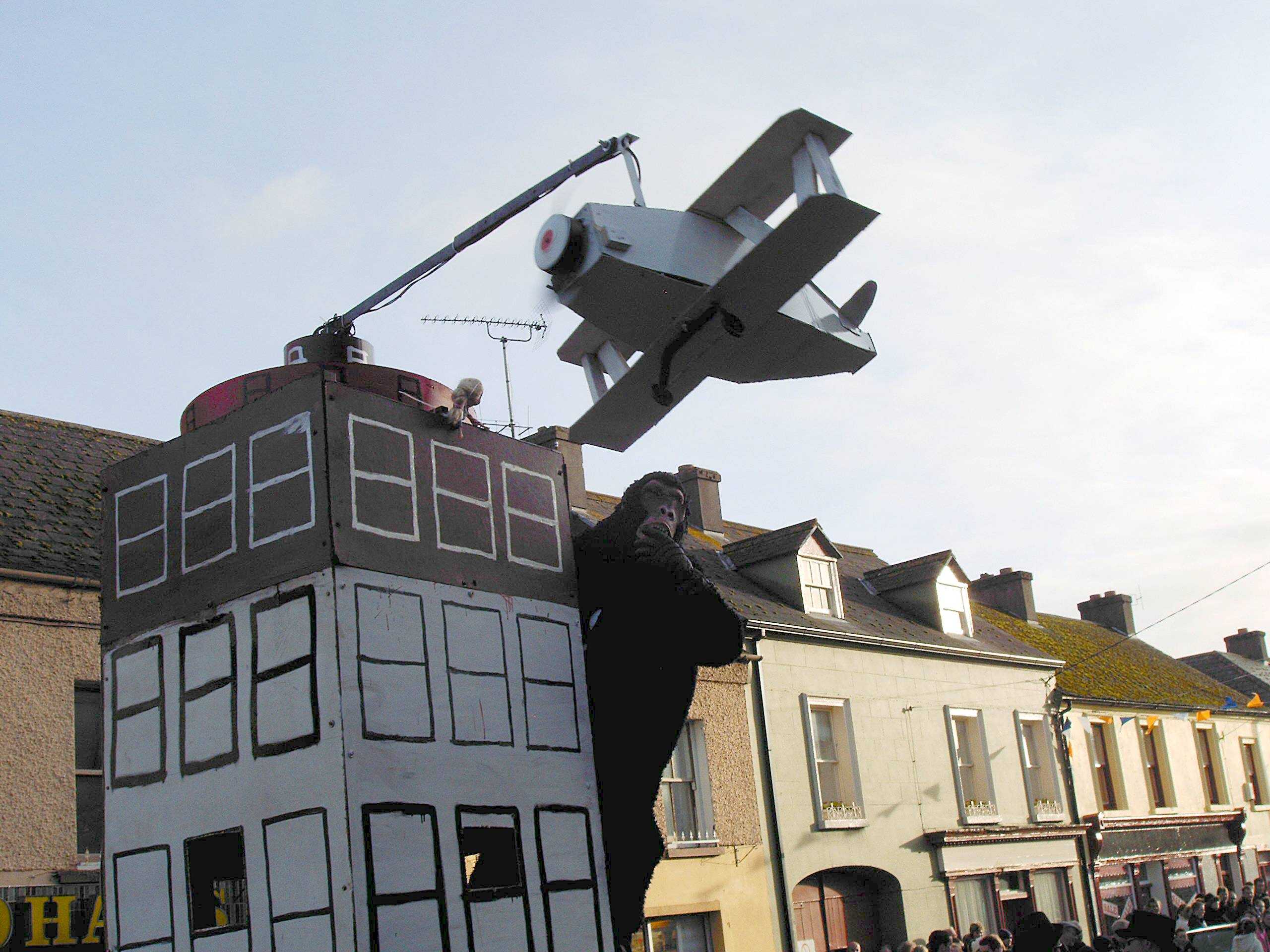 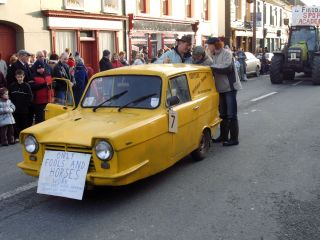 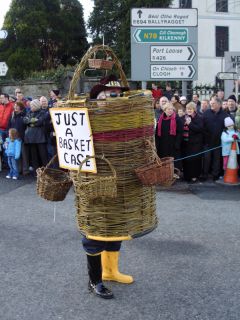 Walking Back to Fitness Wellie Style.

The mild weather lend itself to a bumper attendance for the 26th consecutive Wellie Race. Warming up one and all were the Barrett family and friends with the finest traditional music. The streets of Castlecomer were thronged with spectators from home and away, and as usual the banter and craic of the floats had everybody in jovial and festive mood.

The political fraternity got it in the teeth locally with the proposed Waterford City Land Grab into Kilkenny and nationally former Junior Minister Ivor Callelly was depicted picking daisies and sighing “he loves me , he loves me not”. For the first time ever there was a teasing display of Lap Dancing Comer style and the announcement of the opening of J.B’S. Club. Del Boy & Rodney, a Mobile Cosmetic Surgery Unit, Sumo Wrestlers and fine delicacy in Le Cock Hardy Restaurant and much much more.

There was the year when sport dominated the winners enclosure in the Fancy Dress & Float Parade. The overall adult float top prize went to Firoda Sports Academy, with Castlecomer Camogie Club, Roy Keane (Ciaran O’Carroll, Dublin picking up a third consecutive first place), and José and his Amazing Technicolour Overcoat (Up Chelsea) making it a clean sweep in the Children’s Section. In the Adult 2-5 group King Kong (Tom Cody) ruled while in the Adult Individual top prize again rests in Lowhill, Ballinakill as one Michael Brannigan depicted I’m Just a Basket Case.

Firoda Sports Academy had Seamus Nolan, Frank Brennan and Martin Walsh to the fore. This Sports Academy was designed for training the elite of Firodaland to the highest standard of fitness and achievement. The tutors strive to maximise the mental and physical fitness of their athletes. When the students graduate from the Academy they will have reached their sporting pinnacle. Sports included Archery, Synchronized Swimming, Boxing, Fencing, Sumo Wrestling, Bog Snorkling, Golf, Hurling, Tractor Pulling, Hurling Foootball and Three Legged Racing. Presenting the Graduate of the Year Awards is none other than Professor of Sporting Scientology Seamús McNualláin.

The Ballyragget Mobile Cosmetic Surgery arrived via Farrells of Byrnesgrove. From start to finish, catering for all shapes and sizes, this unit guaranteed a top quality job. Travelling the country the motto was to help our people who were in desperate need of surgery. Judging by the tools used the operation would have to be really necessary. The highly skilled surgeons stood over their state of the art equipment.

Only Fools and Horses had Sean Stone in charge. Live in the Square in Comer Del Boy and Rodney had arrived from Peckham in London to try and sell some of their stock. Of course they travelled in the lap of luxury in their three wheeled company van. Uncle Albert has also come to see exactly what they’re getting up to. As Del Boy says “This time next year they will be millionaires and with thousands of people in Comer today to buy their goods” and few would disagree.
The Executioners hailed from Ballyragget led by Tommy McGrath. This was a comical representation of the controversy surrounding Derick Donaldson and Sinn Féin.

Attracting more than a fair share of interest was Comer Lap Dancing Club with Pat O.Brien of Ballyhemmon in the lead role. The Club recruit young ladies to dance and make money and show the Powley men something they never saw before, I’m not quite sure about that ask the King. “If you ever come to Comer and want to have fun, call into J.B’S and see what can be done. We have whiskey and wine and women by the score, Lap dancers like you never ever seen. Powley men beware, but for a fare you’ll get a share.

Castlecomer Camogie Club led by Chairman Shem Delaney were in celebratory mood and were joined by Marie Dargan, Ballycomey All Ireland Minor Winner.
Roy Keane (Ciaran Carroll) has left Manchester United on foot to join Celtic. The only thing missing from the display was the jersey, I wonder why.
I’m Just a Basket in a Case was simplicity itself and the brainchild of Michael Brannigan, Lowhill, Ballinakill. He had a message wishing Brian Cody & Martin Fogarty the best of luck for 2006.

One had a certain amount of pity for Ivor Callelly picking a daisy and wondering if he loves me or loves me not. Betty Brennan and Máire Ní Threasaigh of Ardra take a bow.

Ciara Sullivan of Kildare but formerly of Lowhill, Ballinakill presented José and His Amazing Technicolour Overcoat. José Mourinho is known as the “Special One” with his Premiership topping team. Up Chelsea no doubt the Curly, The Mono, Kieran Kerwick, Eugene Dillon and the Murphy’s of Drumgoole approved.
Again Lowhill featured in Star Wars Skater. Sarah Brannigan displayed Darf Vader’s new means of transport and skate board.

For the first time a crew arrived from the Bog of Allen. Depicting turfmen of bygone days were John Harrington, Jack Goulding and Peter Goulding. Promoting hand cutting turf they also gave a rendition of A Sprig of Heather.
King Kong had the spectators amazed but plenty of kids especially the small ones scared in a lively show trying to catch an aeroplane, well done to Tom Cody and friends.

There were local strangers in the shape of Viking raiders enjoying and sampling all local brews. Completing an impressive parade was a superb Clyesdale Stallion from Ardenteggle Stud.

The Powley Vale Restaurant of Moyhora went Le Cock Hardy with celebrity chef C.J. Haughey in the kitchen. The days menu for starters there was a choice of Nettle Soup, Magic Mushrooms or Goody. The Main Course included Culed Cow, Panned Rabbit, Massford Salmon. Desserts were Rhubarb and Custard, Apple Pie, Chocolate Mouse . Maintaining culinary standards were judges Powleo Dribblio, Tom Poorly and Elvis Presley. This was a five star restaurant although occasionally patrons bite off more than they can chew, hence the need for the loo. The delivery and take way service came by way of a Honda 50.
The Powley Ranger, Maryville (Jamie Maher) escorted Sinderwellie ( Leah Maher) on a noisy but impressive turbo motor bike.

A Bridge Too Far was the entry of Dillon’s Bar. This float was a Play on the Waterford City Borough Council’s bid to extend into South County Kilkenny. Heated negotiations were in evidence as stout Kilkenny Cllrs. defend the attempts at land grabbing and sod stealing. The term “Blah” is now an affectionate nickname for a native of Waterford City according the men from Bance Country. A poem entitled “A Bridge Too Far” was composed for the occasion. “Waterford County Council said the City was too small, they looked at South Kilkenny and decided to take it all. Maurice and the Bogman knew they’d have to come up with a plan. This was serious business they’d have to fight it to a man. The Decie Blah tried to change Black & Amber to Blue & White. Cody said “If you want Kilkenny hurlers come to the Celebration Banquet on All Ireland Final Night”. The negotiations got very heated the Waterford Cllrs. wanted to spar but like their County hurlers it was just “A Bridge Too Far”.

Castlecomer Wellington Race 2006 attracted a total of 417 runners over the treacherous four mile Kiltown Circuit with a noticeable increase in the walking contingent. First man home was Michael Coyle of Naas, Co. Kildare. A member of Naas Athletic Club this was his first time to compete in the race, he has no local connections and learned about the event through the Irish Independent Newspaper. The first woman home was Catherine McDonald formerly of Barrack St. Castlecomer but nowadays residing in Ballyroan Co. Laoise. Her daughter Breda claimed fourth spot. The senior competition produced no surprises with regulars Billy O’Neill and Bernie Fitzpatrick taking the honours.

To the strains of no fewer than four bands the parade took over an hour to pass the judging stand on the Square. Leading the parade were the Killeshin Pipe Band, Portlaoise Accordion Band, Ballycallan Pipe Band and of course the internationally famous Major Regrets. M.C. Michael Hester as professional as ever kept the show moving swiftly.